SLAUGHTER ON THE NEW LODGE ROAD

When it comes to the recent conflict, the New Lodge area of North Belfast is a district of many firsts. It was here that the British Army first used rubber bullets. On the morning of August 9th 1971, it was here that the first doors were kicked in and men were dragged away for internment. Another first for the New Lodge was the British Army’s use of the ‘Nitesight’ on their sniping rifles, which they used with deadly accuracy in early 1973. The first four days of February of that year numbered amongst the bloodiest Belfast ever experienced. Fourteen people died and many more were injured in numerous gun attacks across the city. On Friday 2nd February, the hooded body of 28-year-old Catholic, Patrick Bradley from Andersonstown, was found in a car in Maurice Street. An 18-year-old petrol pump attendant (Catholic) was shot dead in his cafe on York Road. Earlier in the day ten people from the Beechmount area were injured when gunmen opened fire from a passing car. Undercover British army involvement was suspected in the Beechmount shooting. In Ardoyne, in a similar attack, residents escaped injury.

On Saturday, 3 February 1973, night tension was high. The UDA had paraded from many parts of the city to the Laddas Drive R.U.C. station to demand the release of two of its men. This was the first time Loyalists were threatened with internment. The UDA was up in arms. Many of the UDA men were in riot gear and carried batons. The parade was the first time that the UDA, the Orange Volunteers, Vanguard and the Red Hand Group presented a united front at a public protest.

At 11.00pm a car sped out of Hallidays Road from Loyalist Tiger’s Bay. Its occupants opened fire with a machine gun at Lynch’s Bar at the junction of the New Lodge Road and Antrim Road. Two men were killed, James Sloan and James McCann. The car continued down the Antrim Road and fire was directed at a Chinese restaurant injuring others. The car then did a ‘U’ turn and went back to Tigers Bay. Eyewitnesses reported that a British Army Saracen armoured vehicle was parked on the Antrim Road at the time but did nothing to apprehend the occupants of the car or give medical assistance to the injured. As the people of the area gathered on the streets after hearing the shooting, they soon came under a hail of gunfire from several positions. The British army was firing from Duncairn Gardens down Edlingham Street and from the top of Templar and Alamein Flats. For the first time they were using their new ‘Nitesights’ with deadly effect. 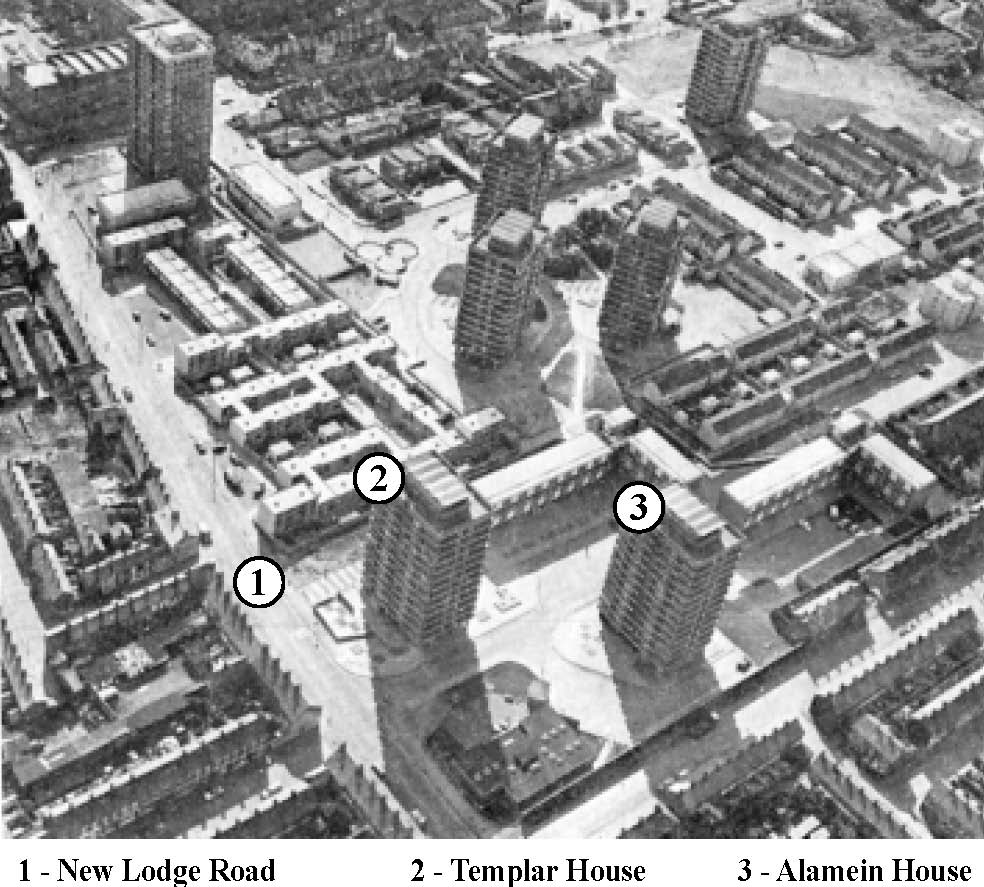 Slaughter of the Innocent

In the midst of this, Tony Campbell was returning from a disco in Newington after celebrating his 19th birthday when he was shot dead by the British army at the junction of Edlingham Street and New Lodge Road. Brendan Maguire went to help Tony Campbell and was shot dead at the same spot. Then, John Loughran, a married man with three children and a fourth on the way, came out of his house wearing just a pair of trousers and a vest to help the injured. He too was shot dead beside Tony Campbell and Brendan Maguire. By this time, people were taking shelter wherever they could, in doorways, under cars or in the old Circle Club. When there was a lull in the gunfire, Ambrose Hardy emerged from the doorway of the club holding a white cloth above his head. He was shot in the head by a British Army sniper. It was only after the ambulances carrying the dead and wounded had left the scene that the I.R.A. began to engage the British army. The next day (Sunday) the people of the area gathered in small groups, shocked and dazed at the extent of the onslaught the night before. Gable walls were pockmarked with bullet holes and six of their neighbours were dead. A protest meeting was held in the afternoon and black flags were hung from windows. One resident referred to the shooting as “the New Lodge’s Bloody Sunday” What they Said The British Army Press Statement said that between 23.45 pm and 3.00 am there was a severe gun battle in the Catholic New Lodge area. In about 30 separate incidents, nearly 200 shots were fired at the security forces and fire was returned on most occasions.

They claimed to have shot seven gunmen of whom six died.

Their statement said that a passing car opened fire on a Chinese restaurant and that ambulances took five people to hospital, but they did not record any deaths along the Antrim Road or any shootings at Lynch’s Bar. An officer in the 1st Queens Regiment said it looked as if the Provisionals had decided on a concentrated effort in the area. They were daring and very foolhardy too, we spotted about twelve gunmen in the area. We know we killed six and wounded others’Army headquarters described the ‘clash’ as ‘straight forward shootout between troops and the Provisional I.R.A. gunmen.’

In the days after, local political representative Paddy Kennedy said in a statement that the army were dishonest and disgraceful in libelling the dead men as gunmen. There was no one in the New Lodge area, he said, who did not believe that the British Army had not set up a crossfire in order to ambush and murder innocent people. He further asked why soldiers did not take action against the car from which the two men were shot, particularly given the huge military occupation of the area. People alleged that the reason no action was taken was because the occupants of the car were military personnel.

The Northern Resistance movement in a statement said: An exhaustive inquiry by the Northern Resistance Movement in the New Lodge Road has revealed alarming evidence of a British Army conspiracy and of complicity with the local U.D.A. to terrorise the residents of the area. Gerry Fitt, M.P., also called for an inquiry into the shootings, as there were so many contradictions in the evidence.

The I.R.A. issued a statement saying: At 11.15 pm on Saturday 3rd February a car came along the Antrim Road and directed fire from a sub machine gun at a group standing at New Lodge Road killing two and wounding several.

The car then sped along Halliday’s Road. People who congregated in New Lodge Road upon hearing the shooting came under concentrated fire from British Army snipers on the roofs of the flats, and from loyalist gunmen. In the second shooting four men were shot dead and others injured. The I.R.A. were at no time involved in offensive action, and it was only after the deaths that they fired at the two groups (British Army and Loyalist) to give cover to enable the dead and injured to be attended to. The British army had quickly issued their usual claim to have shot gunmen. We are adamant that none of those killed or wounded were in possession of firearms at any stage. The people of the New Lodge Road can bear witness to the veracity of our claim.

During this period the military basically had the upper hand when it came to the media. Once the military issued a statement, much of the media took it at face value with little questioning. An example of this was another horrific slaughter in the New Lodge when fifteen people died in a bomb attack in McGurk’s Bar. The military issued a statement saying that it had been an I.R.A. bomb in transit that exploded prematurely. Of course, this was proved wrong and one of the Loyalists involved was later convicted in a case that received very little media attention. The case of the New Lodge shootings was the same. The military issued statements saying that all those they had shot were gunmen and, with the exceptions of some of the Irish papers, the media accepted this without question.

However, in an interesting twist, on the 9th August 1973, some six months after the shootings the Daily Mirror newspaper in a small report on one of its inside pages published the following apology: In our report published in early February on the deaths by shooting of six men in the New Lodge area of Belfast, we included a statement that tests had been carried out to determine if the dead men had been carrying guns and that all had proved positive. This statement came from an army source, the reliability of which at the time we had no reason to doubt. We are now informed that no tests had in fact been carried out when our report was published. When the British Army was confronted with the newspapers apology it refused to comment other than to say that they had issued no statement to the press claiming the men had been carrying guns. Irish Times reporter Hugh McKeown pointed out to the army that within hours of the shooting the press were informed by the army that they had “engaged and shot six gunmen on the New Lodge Road,” and the following day had claimed “that tests had proved that they were armed.” The army spokesman replied that it was a matter for the police. When the R.U.C. were contacted a spokesman said that at present they were “too busy” to check on files.

Hugh McKeown reported that tests had been carried out on the six bodies and that five had the tests proved negative while the sixth body had tiny traces of lead particles on it which would probably have come from the bullet which had killed him. McKeown in his article said that he interviewed an army spokesman the evening after the shootings who admitted that no spent shells, other than the army’s own, had been found. He then retracted this statement and said that five spent shells had been found – only five despite the supposed ferocity of the battle! They also admitted that they did nothing to flush out the rest of the ‘gunmen’ by an arrest and search operation as is generally done after a heavy battle. They said they had shot gunmen from 20 yards away, but when asked could not produce any weapons. 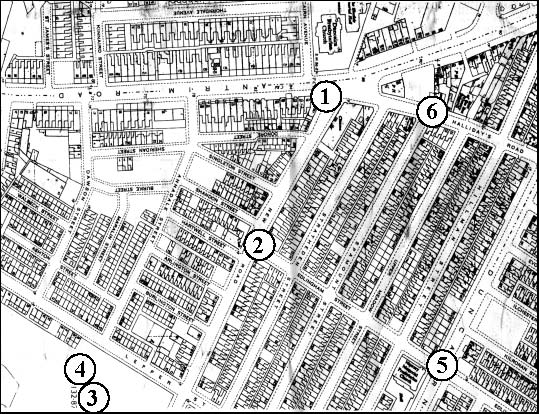 1. Lynch”s Bar where McCann and Sloan were shot dead.

Leaflet published at the time by the Anti Internment League