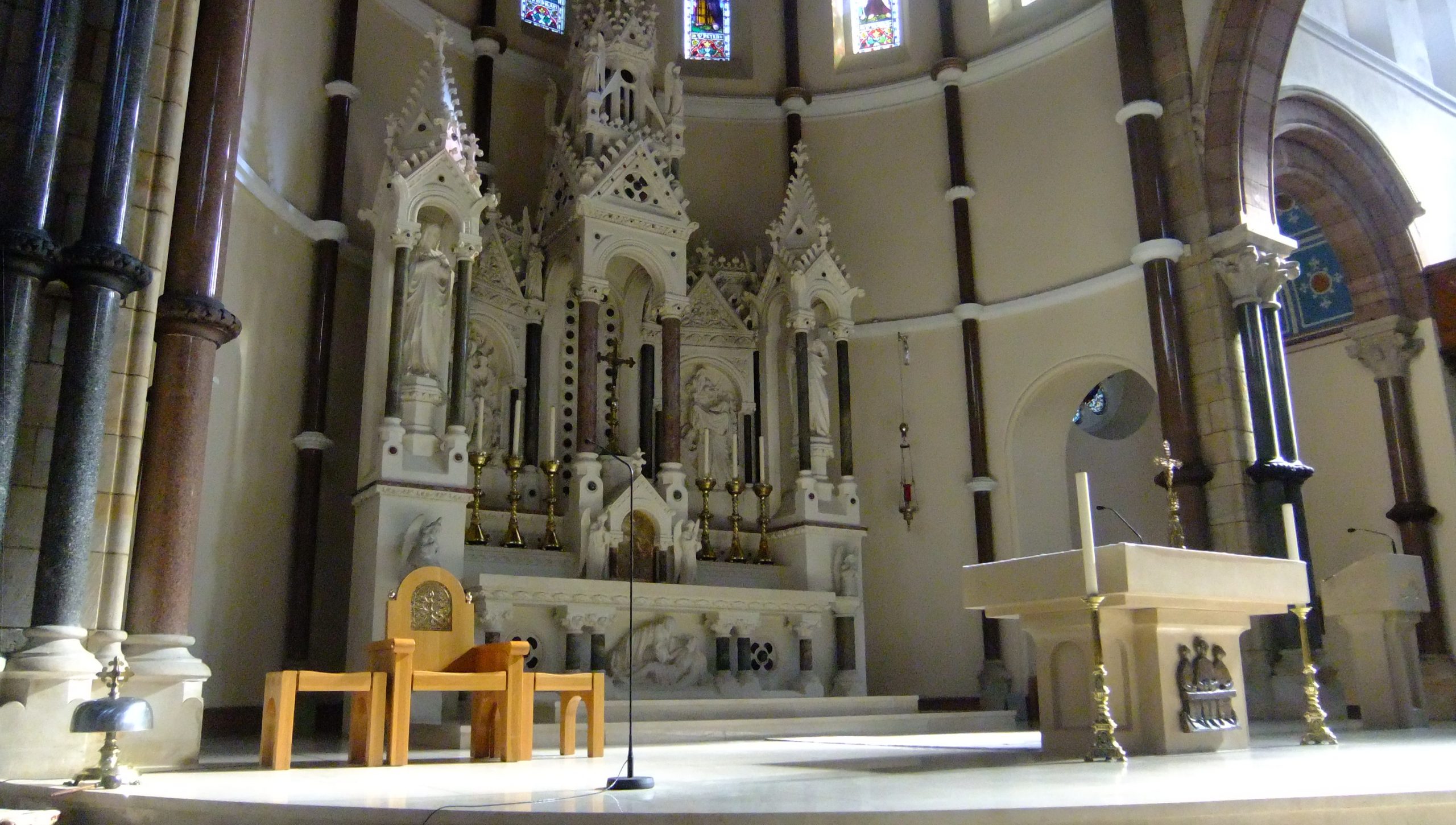 The ancient parish of Shankill included Belfast and its first Early Christian Church was situated in the disused cemetery on the Shankill Road. In the 1306 taxation of Pope Nicholas, for the Crusades, it is titled “The White Church of Shankill”. Later it appears that the church became redundant but its title and functions were transferred to a Church built close to the ford across the Lagan river and the Norman castle. The terrier of 1615 lists church property confiscated at the Reformation naming this church, “St Patrick’s Church of the White Ford”.

English Protestant settlers, who acquired the church, rebuilt it in 1812 renaming it in honour of St George the Patron Saint of England. Catholics reclaimed the ancient title for the church built in Donegall Street by dedicating it to St Patrick, Patron Saint of Ireland.

The foundation stone of the current beautiful church was laid by Bishop Patrick Dorrian on April 18th 1875. During his ministry as the Bishop of Down and Connor (1865-85) 26 new churches were built. This Church of St Patrick was built in the Romanesque style of different coloured sandstone. Bishop Dorrian was buried beneath the Sanctuary behind the priest’s chair, marked out by a thin line of red marble and on the extreme left his memorial, of sandstone and alabaster, can be clearly seen bearing the arms of the Diocese of Down and Connor.

A CHURCH WITHIN A CHURCH

A previous church, built on this site in 1815, no longer sufficed for the increasing congregation but, to accommodate them as long as possible Messrs Collins Brothers of Portadown commenced building the new church around the old. It was then demolished in August 1876 and the entire fabric of the new church was speedily completed for blessing on August 12th 1877 by the Primate of All Ireland, Archbishop Daniel McGettigan of Armagh. A 2 ton bell, cast by Thomas Sheridan of Dublin, had already been placed into the 180 foot (54 metre) spire. Thomas Heanvey, the architect of the splendid new Church, had been a former associate of Augustus Welby Northmore Pugin and like him did not brook delays.

Inside the church, ten beautiful arches of red sandstone, supported by slender rose and grey Dumfries granite pillars separate the nave from each aisle. Three further arches separate the sanctuary from the nave. As the eye traces the orbit of the 50 foot (15 metre) high centre arch, it comes to rest on the pitch pine ceiling.

The altar is the centre piece of any Catholic Church; it represents Christ. Daily on the altar our Lord Jesus Christ is made present, renewing the sacrifice he made on Calvary on our behalf. “He is living for ever to intercede for all who come to God through him” (Heb 7:25). A new altar of Portland stone from 1997 faces the congregation but behind it the original high altar with its reredos of Caen stone, relieved by Cork red and Galway green marble columns, has been retained. The reredos together with its sculptures was the work of O’Neill and Pearse of Dublin as was the Portland stone statue of St Patrick outside in the tympanum over the main front doors. 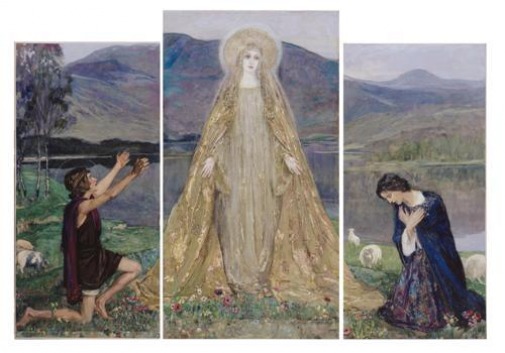 REFURBISHMENT AFTER THE 1995 FIRE

After a catastrophic fire on October 12th 1995, every effort was made to restore the church to its original state by the then Administrator, Very Rev David White and his project manager, Mr Oliver Magill. To repair the reredos and its tabernacle, old sketches and photographs were consulted. The tabernacle is the name given to brass and gilded safe in the reredos in which the sacrament of Christ’s Body and Blood is reserved for the sick. In fulfilment of his promises Christ is present under the sign of bread in the Eucharist, “I am the living bread which has come down from heaven… anyone who eats this bread will live forever” (Jn 6:51).

The church was reopened by Bishop Patrick Walsh on October 5th 1997.

SHRINE OF MARY AND BAPTISTERY

Left of the sanctuary is the modern shrine of Our Lady of Comfort, by Mr Chris Ryan of Howth in 1997. Mary’s Son is held out to us as Saviour while a lady, representing the parish, seeks patronage. On the right is the Baptistery whose font commemorates on seven of its eight sides the grace giving sacraments established by Christ. A lighted “Aumbry” in its side wall contains the holy oils used in the administration of the sacraments. The Calvary on the extreme right likewise survived the fire of 1997.

To beautify the church stained glass windows were added as funds permitted. High in the apse seven windows depict the Lord Jesus with his saints in glory. A circular window in the Shrine of Mary represents the Magi visiting Bethlehem while in the Baptistery a similar round window portrays Jesus revealing the love of his Sacred Heart for all people to St Margaret Mary. Four windows in the left transept, reinstalled from St Kevin’s Church in North Queen Street before its demolition, represent the Holy Trinity; the Triune God, Father, Son, and Holy Spirit. The original windows in the right transept were destroyed as a result of an explosion during the recent years of conflict, but the six windows now installed to commemorate the centenary of the church, illustrate the life and apostolate of St Patrick. It is noteworthy how often Mary the Mother of God is depicted, under different titles in the remaining stained glass windows of the nave.

A shrine on the right is dedicated to St Anthony of Padua; there is a first class relic of the saint in the reliquary on the left hand side of the statue.

The valuable tiptych on the left of the nave was presented in 1917 by the renowned painter Sir John lavery, in memory of his baptism in the previous St Patrick’s Church on March 26th 1856. His second wife, Hazel Trudeau was the model for the Madonna while St Patrick and St Brigid were modelled by his daughter Eileen and step-daughter Helen respectively.

All of Lavery’s letters to the Administrator at the time, Fr O’Neill, are reserved in the Parish archive. They give great detail of the original setting of this work including the original side altar and furnishings commissioned from the great architect, Sir Edwin Lutyens which are, unfortunately, now lost.

The church holds a large collection of relics of saints, most notably two relics of St Patrick; the silver shrine fashioned for the arm of St Patrick, circa 1300 AD in the Ulster Museum, Belfast and the silver jaw bone shrine, circa 1645, presently on loan to the Down County Museum and can be viewed there at these respective museums.
Share This
Copyright 2006-2020 All Rights Reserved
Back To Top
×